Batshit in Battambang. Vacuous in Vietnam.

Well, well, well. I'm sat at Incheon Airport, a mere 35km from North Korea. WTF am I doing here? Good question. It all started back in April where a confluence of events conspired to chart a new course for my erratic life.

The stock market shat the bed in March, instantly wiping a metric-fuck-ton off me stash and resulting in cruel dividend cuts. Unnerving. I know we're supposed to remain calm in these situations but that's easier said than done. I was living off those dividends!

During the middle of the Corona-bedshit, I was receiving job alerts from tes.com, a teaching website. I normally delete them but one caught my eye: A Level Math Teacher in Vietnam. A luv me maf me like - especially that level. I fired off an email and was invited to skype two days later. An enjoyable 90-minute chat with a Brit, who had a BA in History from Oxford, ensued. A day after that, there was a very lucrative job offer in my inbox. More than double anything I've had in Thailand!

Zero to hero in a week. 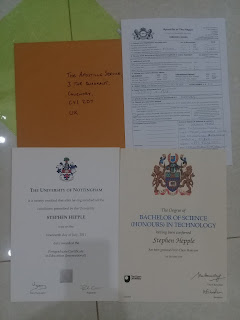 It's bizarre. I wasn't really bothered whether I got the job or not. It had to be perfect to even consider it. And it was. As far as I could tell. I was quite blunt during the interview about what I was (and wasn't) prepared to do. Perhaps the guy picked up on this? I was relaxed, yet confident. Felt good. There's nowt like bargaining from a position of strength - I didn't really need this gig - but accepted anyway.

A chance to experience a new country, teach my favourite classes and add a few bob to the stash. So the first thing I had to do was learn a whole slew of legal jargon. I had to get my degrees notarised, apostilled and attested. The originals are sent to the UK to be stamped by various big-cheeses to confirm they're legit. Very stampy and very costly.

Had a laugh in the Post Office. I had the temerity to disturb a postal worker playing on his phone with his flip-flopped feet on a table.
"Excuse me, where can I buy an envelope?"
"No hab."
"But this is a Post Office."
He swatted me off like an irritating fly telling me to go to a bookshop. Gotta love that turd-world service. The take away is that Khmer Post Offices don't sell envelopes. Sending important documents from Battambang proved to be a challenge.

One of the reasons I chose Vietnam was that it's next door to Cambodia. However, the borders have been closed for donkeys. I told the school I'll rock up when the borders open - but they wanted the new teachers there for the start of term. Fair enough. But the only way that's possible is to enter Vietnam from Korea. So that's what they did - paid for tickets from PNH to ICN and back to Vietnam. Insane. And that's where I am now. Sat in Korea's main Aeroporto. I had to tie things up quickly after 9 months in Battambang. I closed my bank account. Back in September I had $4,300 when I quit the shitty Chiang Mai job. Ten months later I've got $2,800 left. So $1,500 over 10 months isn't too bad right? Well, it should be noted I spent very little (averaging under $400/month) and I taught English online 4hrs/week bringing in around $360. So, aye, not bad. Look at that wonga. 7 months of Battambang-living right there. 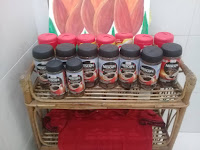 I may have binned tabs, booze and birds but I seem to have replaced them with coffee. Never realised until I binned the empties. Six month's worth. Drink it like wata. It was really hard to let the bicycle go. I sold it to the lass who runs Ganesha for $20. Brilliant bit of kit that was. Better than a scooter in many ways. 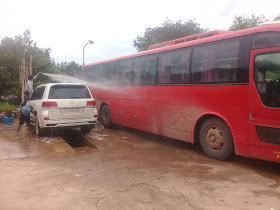 In day-to-day life I never really notice that I'm in the turd world. However, a Cambodian bus trip is like a sobering slap in the face. Battambang to Phnom Penh is 180 miles. It took 9hrs. Mental. Ashington to Manchester is 170 miles - could you imagine that taking 9 hours? Toilet stops are at the side of the road where you get to gawp at old women squatting in the bushes. I can mostly suck it up but about 20 miles away from Phnom Penh, the driver stopped to have the fucking bus washed. I shit you not. We all had to get off to watch. This vital task couldn't wait until after he'd dropped the paying passengers off. Obviously. 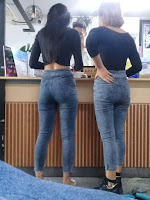 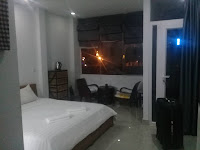 I was shattered, so pleased to stay in this $14 room with great views. Wish I could speak Khmer as well as I can Thai. Enjoyed a couple of Full-Englishes in the Phen. 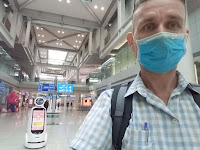 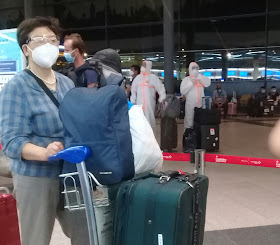 Next it was a $3.50 tuktuk to PNH airport. Eerily quiet there. Weird. These two Chinaman in full HazMat suits did nowt to ease the tension.

Had a selfie with the famous robot at Incheon. A stark reminder of the differences between the turd-world and the first. Korea, like the UK, feels highly organised. Perhaps too organised. Too uniform. To the point of lacking any character at all. It's really hard to pinpoint why I'd prefer to stay in Cambodia over Korea. Perhaps some things can't be explained? Just go with muh feelings. 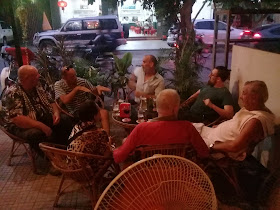 A group of Battambang Boys. A fine group of gentlemen. The conversations range from the profit margins on 50c beer to loftier topics like where to get hair dyed. 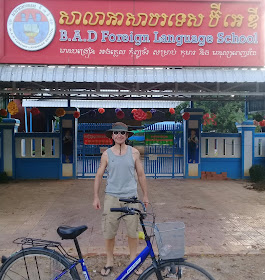 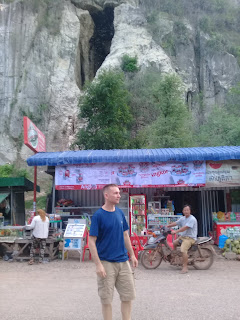 Did some exploring once Dave got himself off the piss and fixed his bike.

Looking at the bats exiting the Bat-Gash. Probably Battambang's premier site. Loadsa bats coming out of a gaping rock gash.

Followed by the best-named school ever. BAD Language School hehe. 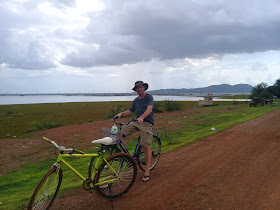 One day we cycled 86km to an underwhelming lake west of the Bong.

86km on a bike with a basket on dirt roads is quite a feat.

Another ride was to see some mahussive fruit bats south of the Bong. 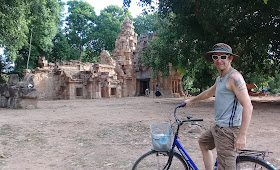 And another day to Wat Baset.

An old dude saw two whiteys so tried to get some coin for his Lao-Cao piss up that night. He backed off once he realised he wasn't dealing with fresh-off-the-plane twatpackers. Just a random dude posing as a "ticket officer" for a pile of shoddily-assembled stones. 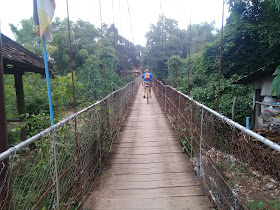 It's not all living-the-dream-in-paradise. Dan-the-man, (Dave's best mate) was eking out a living teaching English online for $10/hr. The last time I saw him he was telling me he'll soon be making "six-figures" teaching online. A day later he was in prison. Visa overstay and harassing local businesses. There's a whole online thread about this Batshit Brit in Battambang. 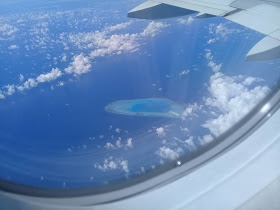 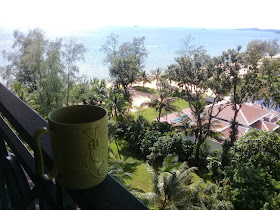 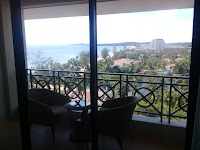 The balcony at VinPearl Resort on PhuQuoc Island. 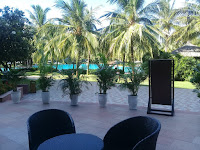 $130/night room and free scran for a fortnight. Can't be bad. 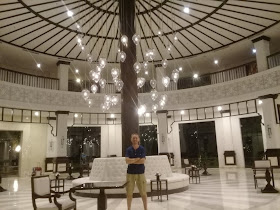 Felt that strange duality of emotion again. Sad to leave Battambang after 9 months, yet excited for the next adventure.

After a year off I'm ready to get back to it. Haway the lads.

The universe is rich. If you allow it be.
Share