I'm writing this from a poky little bed-n-bog on the 4th floor of a small hotel in the pulsating heart of HoChiMinh City. It's taken some getting used to, the noise, the building shaking when a truck rumbles past, the horns, the perpetual white noise of traffic, music blaring from bars.

Did I mention noise? The last place you'd expect to find an AWOL Geordie.

Stop moaning. What've you been up to? 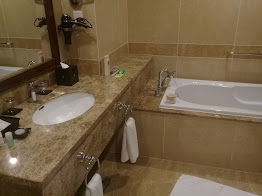 Ended up staying on PhuQuoc Island for 3 weeks. Pronounced Foo Hwok (as opposed to Poo Ket for Phuket).

The 3 week quarantine was a Vietnamese government requirement. I had to endure 21 hot baths with bath salts (whatever they do). And 5 star food delivered to my $130/night room three times a day. Rough.

I'd chuckle to myself that I'm the same lad who slept in a one-man-tent for weeks in Iceland, spent a year in a Bangkok slum with no glass in the window and spent years living onboard cramped submarines. Yet here I was enjoying 5 star luxury. Nice contrast. 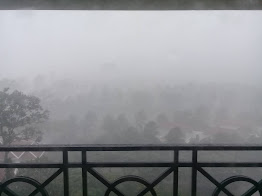 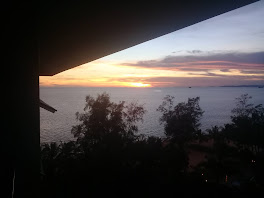 Was the earth was breathing?

I'd contemplate the omnipresent duality of nature and our bizarre presence within it.

Perhaps our sole reason for existing is for the universe to observe itself? Or perhaps there is no reason? I've been diving into philosophy again lately. Particularly, Schopenhauer (my favourite), Nietzsche and Plato. Smart bastards. The lot of em.

Side note: If you're wondering why the west is floundering, you could do worse than read Plato's Republic. One of the founding fathers of Western philosophy. Timeless. Another quote that comes to mind when I think of the West is Ayn Rand's: "You can ignore reality, but you can't ignore the consequences of ignoring reality." She wrote Atlas Shrugged which is another brilliant read. 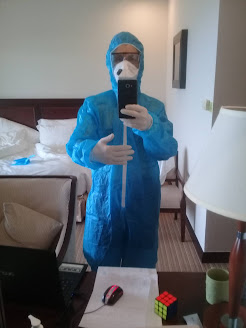 Finally managed to figure out a Rubik's cube following a youtube algorithm.

Always wanted to do that.

Someone in our group actually had the dreaded flu. She was quickly whisked away. I wonder if she survived given the 99.9% survival rate? 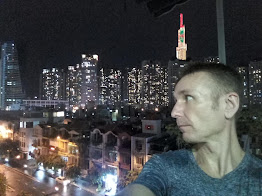 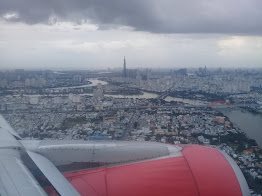 Once we were shown to be clean it was off to the Big Smoke.

This is the view from my room. Canny. 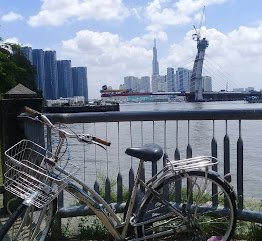 Not exactly in the CBR500's league but it's 200 times cheaper. Costs zero to run and provides a little exercise each day as I cycle 1.5km to work.

The only cyclists I've managed to overtake have been grannies in conical hats. 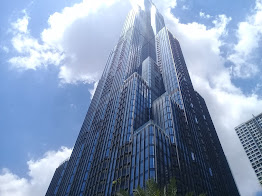 My new place of work is at the foot of Landmark81 - Southeast Asia's tallest building and the world's 15th. I'd never heard of it. It's a bit much to reconcile after a year of chickens, rice fields and dirt roads in rural Cambodia.

One of my new colleagues has a condo on the 49th floor of a nearby tower. I was more impressed with the buttons in the lift than anything else. Our ears popped on the way up! 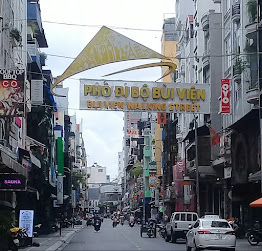 Found some gardeners in one of the few areas of green in HCMC. I love those conical hats. My students will be calculating the volume of one using integration soon enough.

I cycled down HCMC's KhaoSan Road. Strangely bereft of twatpackers. Coz Covid. I was here in April 2007 but barely remember anything. Stayed a couple of nights and left for the jungles and hill tribes of the Southern Uplands. 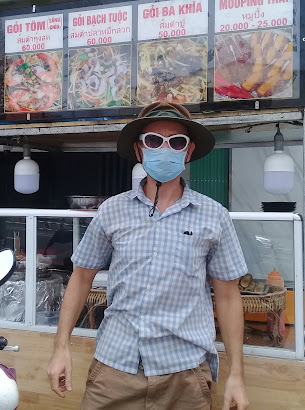 Passed this Thai food stall near Bui Vien Street. Was taken aback to see Thai script so had to investigate. Gutted the owner wasn't there. The person running it couldn't speak Thai (or English) so I never got to the bottom of it.

I'm guessing they might've been surprised to meet a Farang in Vietnam who could read Thai. A bit like the Laotian bloke I was sat next to in Korea. He'd been speaking Thai (Isaan-Thai for those in the know) on the dog-n-bone and got a shock when I started gobbing off. 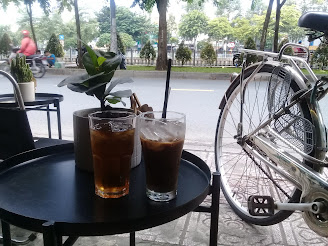 I've mostly been chilling in these little riverside cafes I was lucky enough to stumble upon. Not exactly peaceful (nowhere is) but the best I've found so far. There's a riverside park near work where I can see myself getting back into jogging in the evenings. It's kinda surreal with LM81's massive presence looming over us - lit up like a cuboidal Xmas tree.

Had a couple of massages from a lovely young lady named Kim. A true professional. Despite the language barrier.

Speaking of language, I'm doing OK but every word or sound means something else in Mandarin, Khmer or Thai which is very confusing. Obviously.

Was good to see my first monthly pay deposited into my new bank account. It's been a while. It's the highest teaching salary I've ever had! I'll be buying a chunk of bitcoin and some dividend paying stock with the lion's share of it.

So aye. It's back to wage-slavery for a year or two. My fellow worker-drones are a decent bunch. A few of them are very happy to have escaped the UK. Man, I enjoyed me year off.

However, I'll mostly be kicking rocks on the weekends. I remember feeling lost in Bangers in 2012, especially at weekends, and it's similar here. I used to drink a lot back then to ameliorate a nagging sense of unease. It'll be interesting to see how it goes this time as a teetotal monk. These massive cities engender feelings of loneliness. Millions of pod-dwelling souls. Crabs in a bucket. Superficial. Not really my cup of tea. But I'll persevere.